So Simple It’s Silly is a series of incredibly easy sweet and savory recipes. Minimal ingredients, great short cuts and not at all time-consuming.

Happy National Siblings Day! I know I said I would only post Cambodian recipes for the month of April, but I’m going to take a small break just for this post and tell you a story! 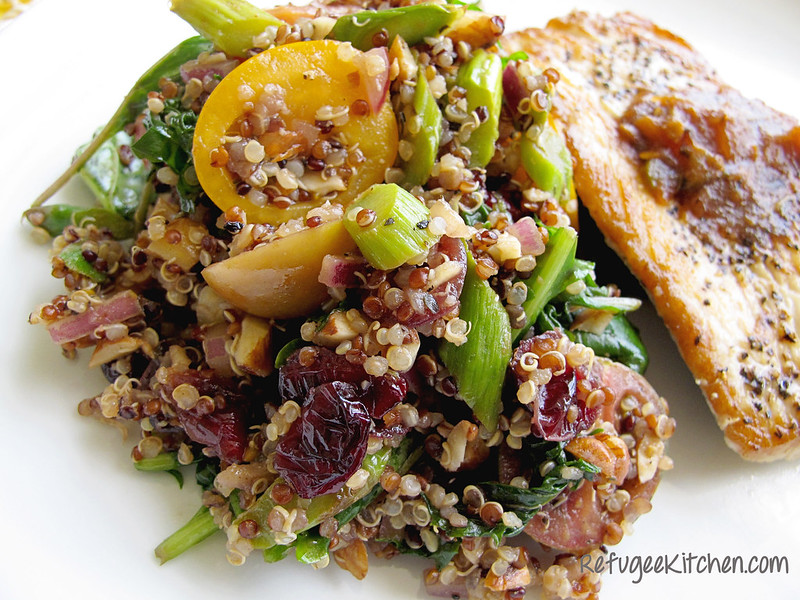 In 1994, in the midst of my angst filled age of 14, my mother gave birth to a baby boy. At that age, it was horribly gross to imagine my parents were sexually active let alone still having babies, but they did. My baby brother was a sweet, happy and shy child, I used to spoil him with toys, clothes and trips. When he turned 2, I gave him 2 presents; when he turned 3, I gave him 3 presents, so on and so forth. Of course when he turned 6, I gave him the choice of 6 little presents or 1 big present equaling $60, at 7 it was 7 little presents of a 1 big one worth $70. It continued this way until his teenage years when he’d then ask for nothing but clothes. He’s an incredibly stylish young man! Some say I spoiled him, others say I spoiled him rotten, but he’s my baby brother and that’s what big sisters are there for! To spoil the baby of the family when I can!

Growing up, spoiling from my parents meant our choice of McDonald’s every so often, we didn’t eat American food very much but when we got the chance to, we’d pig out. I would cook for my baby brother, his palate and appreciation for flavors was cultivated by me as young as 3, he was the only kid I knew who liked brussel sprouts and artichokes. Weekends were always spent swimming, mini golfing, hiking, exploring, movies or picnics in parks. For his 12th birthday, we gave him a huge party with an inflatable boxing ring and giant inflatable gloves, although I think the adults had more fun than the kids did. For his 13th, I took him for a weekend at Disneyland, his first time on a plane, he ate my airplane snacks and I let him sit by the window. I remember one day, while driving home, I asked my baby brother if he was scared I had gotten so sick. He wept a little, then only 9 years old, he told he was and he never wanted anything to happen to me because he’d miss me so much. That kid I swear, my heart, he has it.

My baby brother is 19, 6’1 and 190lbs now and I still treat him mostly the same, although with the birth of my new niece, she’s now the baby of the family title holder. As he’s grown up, he’s become a man who loves concerts, working out, girls, fashion and Instagram, he’s a charmer by nature. He’s charmed many dollar bills out of my wallet over the years, he’s also helped me when I needed help the most. At one point he’s helped carried me when I could barely walk, he’d go on shopping trips with me and pluck all the items I want from shelves I couldn’t reach, he’s carried all my heavy bags and he’s made me laugh. In those times, what I needed most was laughter. 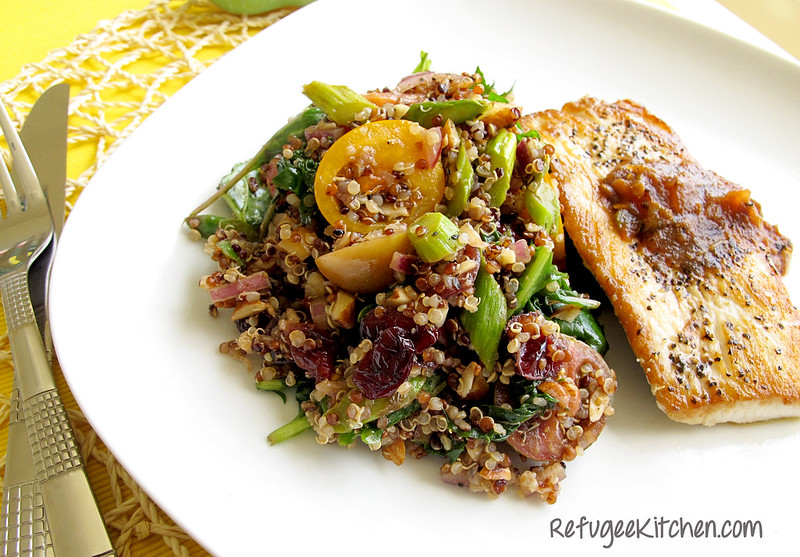 Recently I made a quinoa salad for lunch, I’ve experimented with quinoa for some time now. Although it doesn’t replace all my white rice consumption, it now has a permanent place in my diet. This quinoa salad was pretty yummy, even I was surprised by it. I added a little of everything I had lying around in my fridge and pantry. The rest of the family must have thought it yummy also, when I went to find more for dinner it was already gone! Today after Gymboree with my niece, the baby brother asked if we had more quinoa, he couldn’t find it in the cupboards. I said I’d pick up some more today when I’m out grocery shopping, he got excited and asked me to make the same quinoa salad from a few days ago. Apparently it was him who ate it all, it always warms my heart when anyone enjoys my food that much. My brothers (the baby and the little brother, 19 and 28) like to tease and tell me I can’t cook, they do this as they consume massive amounts of my food in front of my face. They do it because I get really insecure about my food and have a fit, threaten to never feed them again, they would in turn show me empty plates and tell me to calm down. They do it every time and enjoy my angst! See how they treat me? 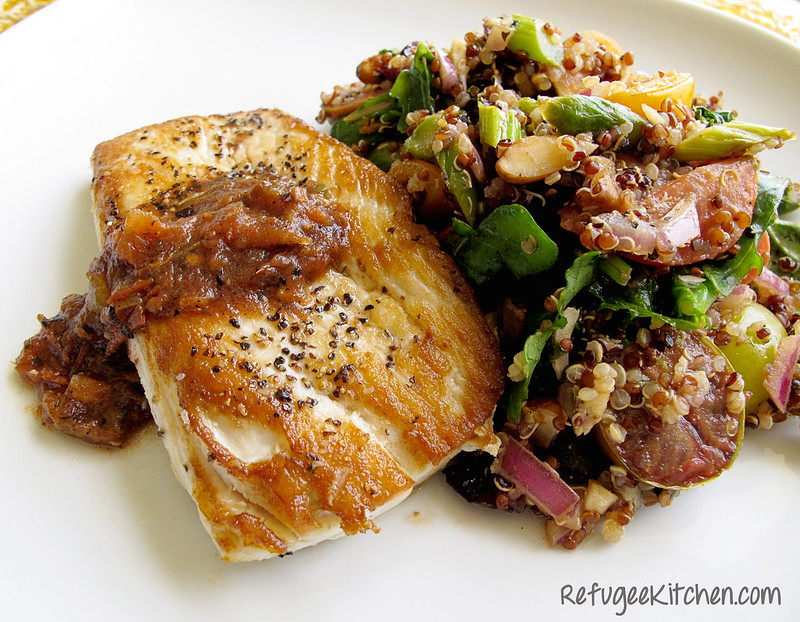 I just wanted to share a little story on this day about my special relationship with my Baby Brother, I couldn’t think of a better day to do it. I served my quinoa with Mahi Mahi, seasoned simply with salt and pepper and quickly pan seared with chipotle salsa on top. This recipe is fantastic on its own or served as a side, it tastes even better the next day. Serve warm or room temperature, studded with sweet dried cranberries, crunchy almonds, raw and cooked vegetables plus kale stands up to the warm salad well without wilting into nothing. Did I mention it’s also low carb, gluten free, organic (if you used all organic ingredients like I did) and vegan? Yea, it is!

Serves 6 as a side dish or 2 very hungry brothers.

METHOD:
1. Cook quinoa according to package directions. Quinoa is done when you see the tell tale white rings around each grain. Man quinoa is just beautiful isn’t it!? 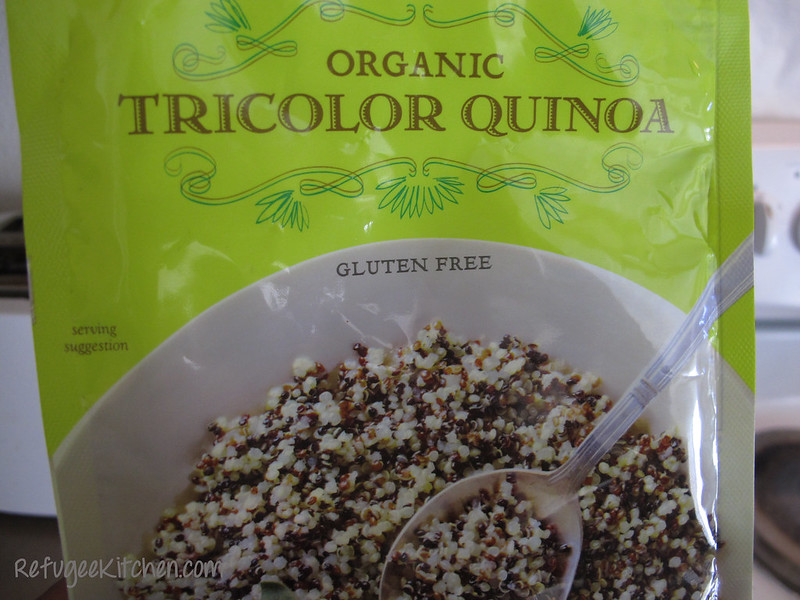 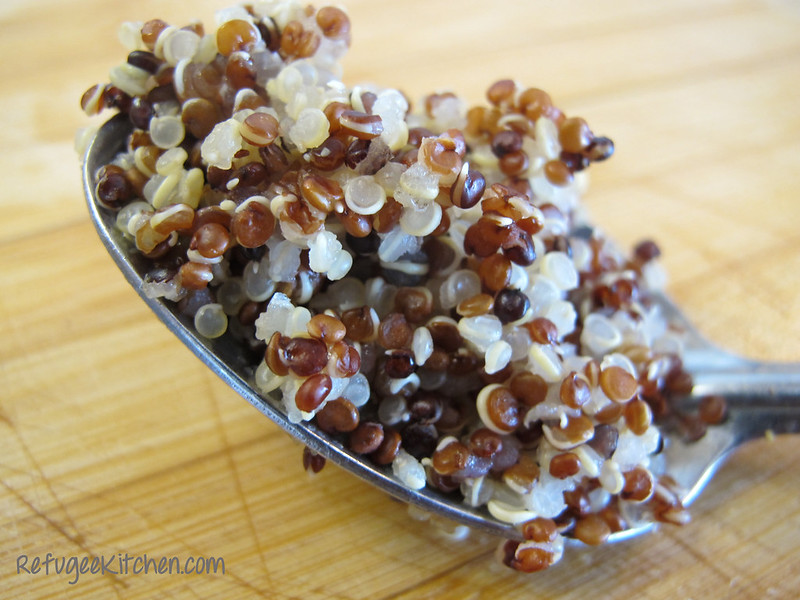 2. Whisk together dressing ingredients. I also like to add onions and tomatoes to the dressing. I find it mellows out the harsh onion flavors and allows the tomatoes to release their juices a bit. Toss together and set aside. 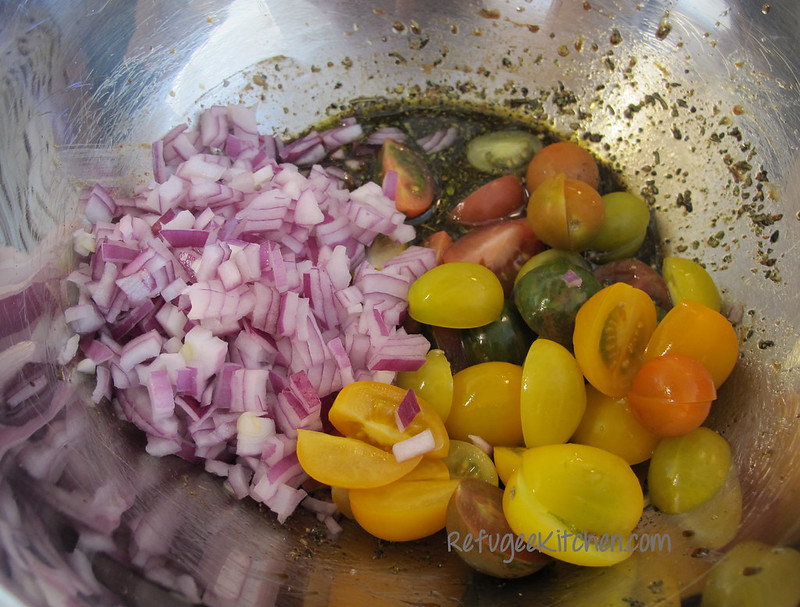 3. When quinoa has cooled slightly, add to onions, tomatoes and dressing mixture. Warm quinoa absorbs the dressing better than cold quinoa! Toss together.

4. Toast raw almonds in a dry pan over medium heat. Let them toast slowly, stirring every so often until warm and you can smell the almonds. Don’t burn them or let them go too long! Remove and roughly chop. 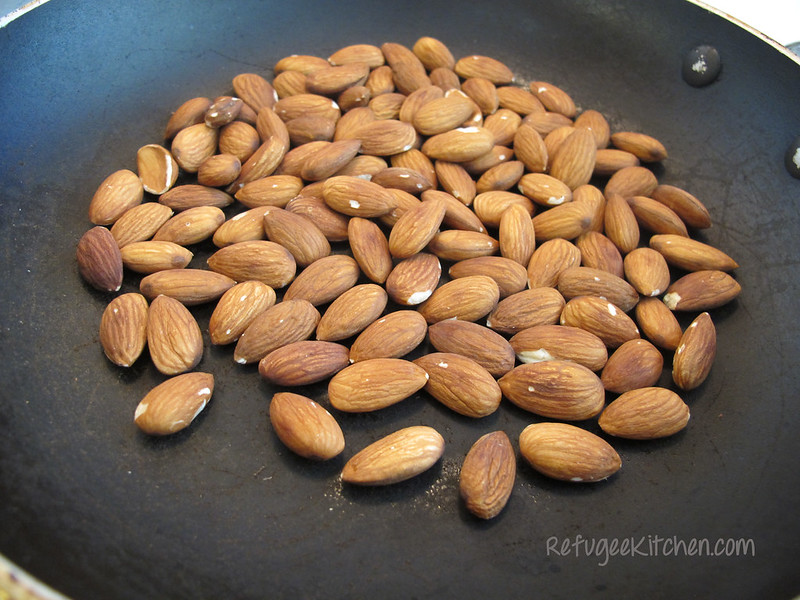 5. Turn heat to high, add 1 tbsp oil ( I used veggie oil), add asparagus with a sprinkling of salt. Toss and cook 3-4 minutes or until asparagus is lightly cooked but still crunchy. I like high heat so I can give them a beautiful char. 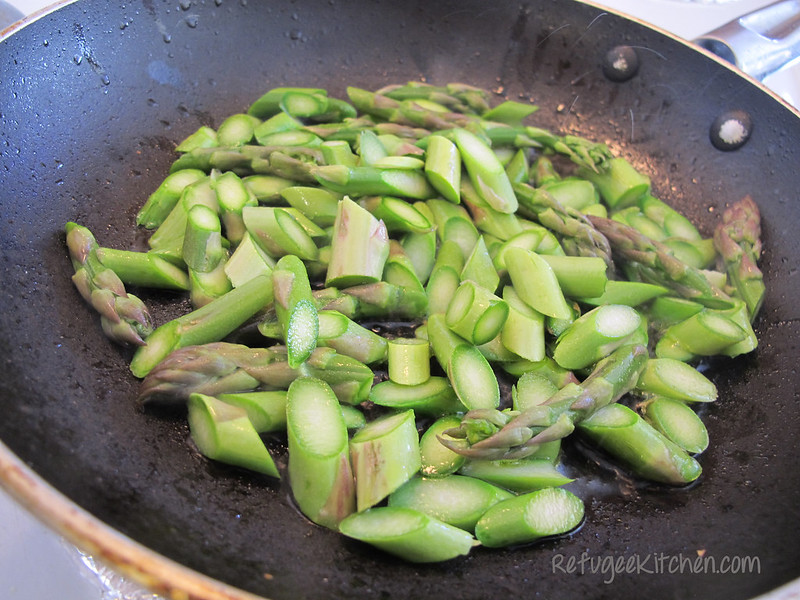 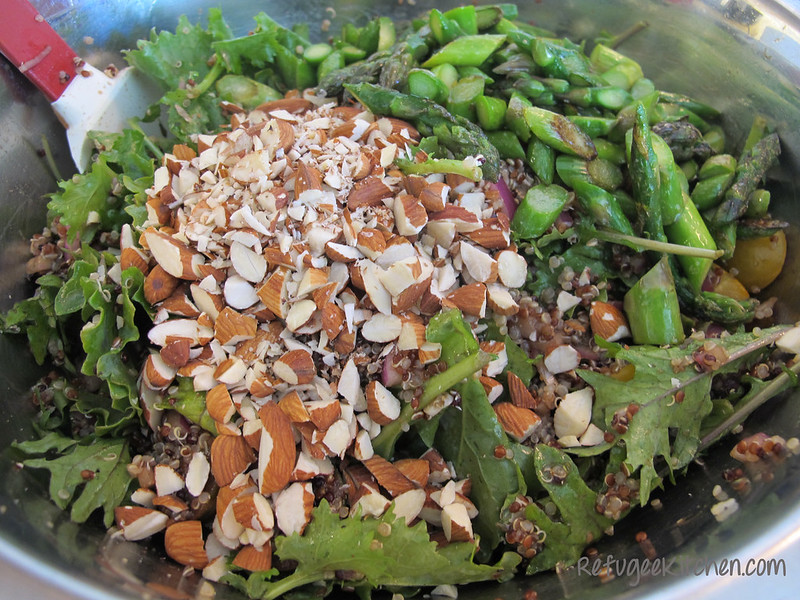 7. I had them on hand so why not, toss in a handful of dried cranberries. Mix gently and serve hot or room temperature. 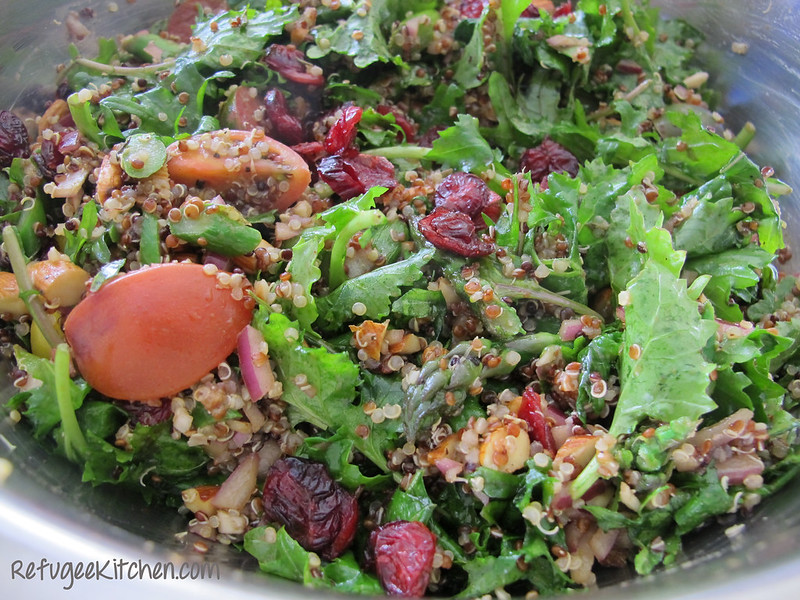 So pretty isn’t it!? 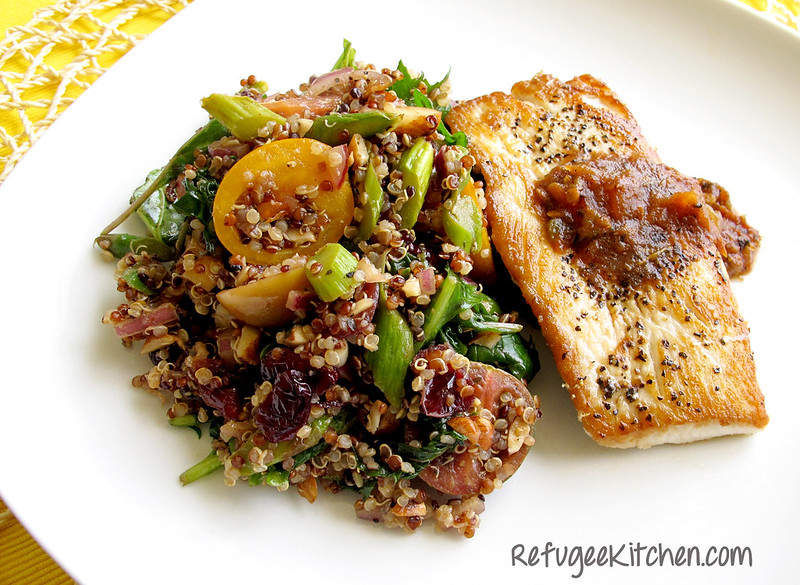