So now I’m officially 2 weeks behind. Next week I need 3 posts to be completely caught up, slowly and surly I’m catching up! I feel less guilty because I do have things to post now, if only I can get over my laziness at times! 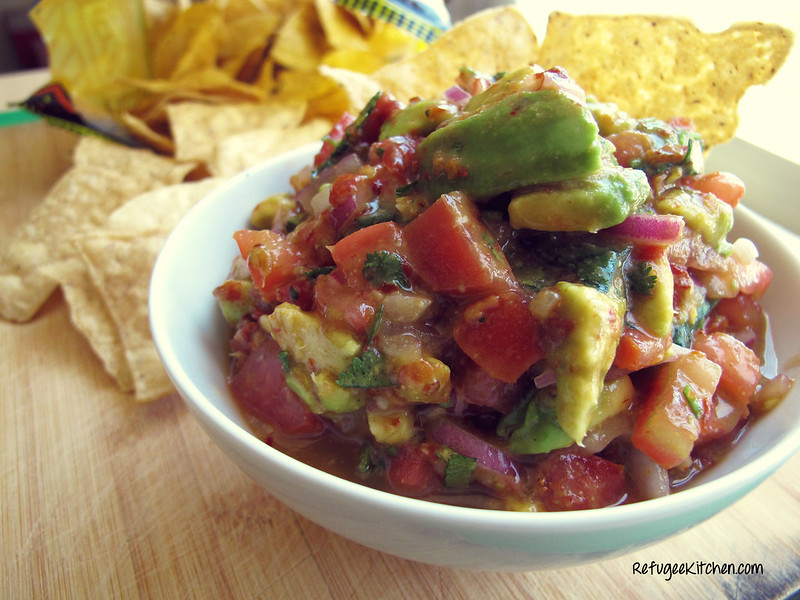 I adore pico de gallo, I can eat a ton by myself and I’ve made it almost every week lately. It’s fresh, easy and gets better the longer you keep it, though in my household it barely lasts two days. It’s so easy to make, just chop everything about the same size, squeeze some lime to taste and voila! Instant happiness. I use it as an easy topping on grilled chicken, fish, black bean burgers or simply eaten with an open bag of tortilla chips while being a couch potato. For this past Memorial Day I made a huge batch of my super special Spicy Avocado Pico de Gallo to take to the beach as a snack. Yes that’s right, it’s a pimped out version of the original pico de gallo I usually make. All we needed was a big bag of tortilla chips, ice for our cooler, a few drinks and we were off. What we didn’t count on was the massive amount of traffic it took to get to Santa Cruz Beach Boardwalk. I should’ve known better! What normally is a 1.5 hour drive from San Francisco turned into a 2.5 hour ordeal, mostly during the last 6 miles of our trip. 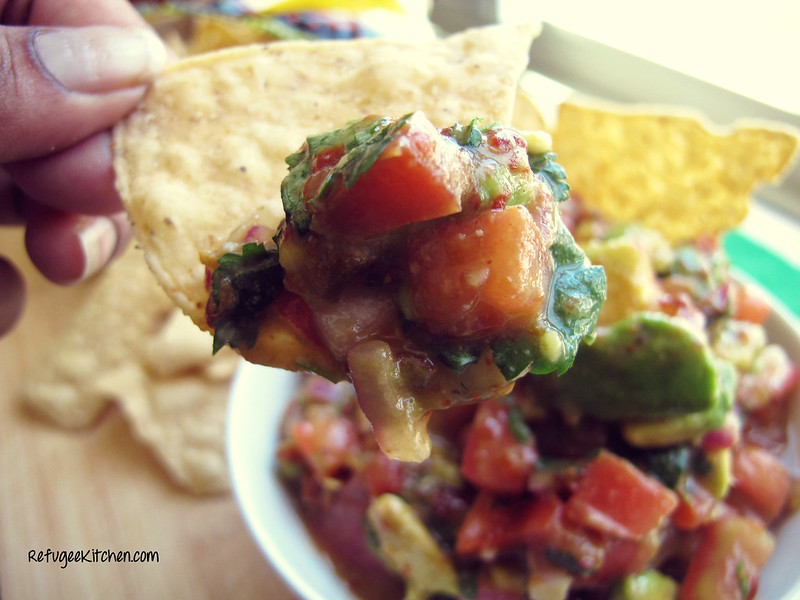 When we finally parked, it was long trek in burning hot sand until we found my sister and her family. Luckily they had a tent and an umbrella set up, plus cold drinks in the cooler helped me finally cool down. I know, I go to the beach to complain about the heat, but really it was a hot day! I also had a wardrobe malfunction. My extra cute niece loves to hang onto my neck, she thinks it’s funny when I cry out in pain after she claws at it; thankfully her nails were cut short today! My niece held tightly on to the straps of my suit and dress as she giggles at her Uncle Blackie making faces in between her mother feeding her. At one point, Uncle Blackie really scares her and as she falls into a fit of giggles, she tumbles down taking my straps with her. My left boob completely out for everyone on the beach to see; as I struggle to release her grip on my straps and shove everything back in place, my sister saw it poignant to scream out “nipple slip”. I had a nipple slip, on the busiest day of the beach, oh life!

Aside from the traffic and nipple slip, I actually had a fantastic day, the pico de gallo was a welcomed refreshing snack between the junk food munching we had on the boardwalk that day. It was the first time my sister and her family had my pico and I ended up giving them a container to take home. I made 5 containers of pico on Sunday and Monday I came home with half of one left, I call that a successful recipe in any book! Well I guess I should count that my family finished 2 containers of pico on the day before and I only took 3 containers to the beach, but that’s neither here nor there! 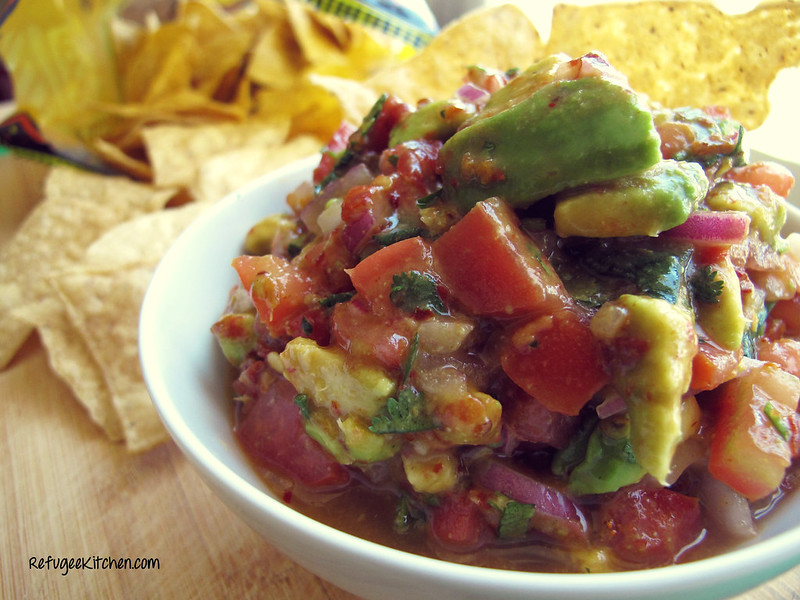 I made a big batch of this recipe personally, but I’m posting the smaller version of it.

METHOD:
1. First let chop these tomatoes up. So juicy and lovely aren’t they, not too overly ripe and should still be firm. You can de-seed them if you don’t like a super runny pico de gallo. I de-seeded half. 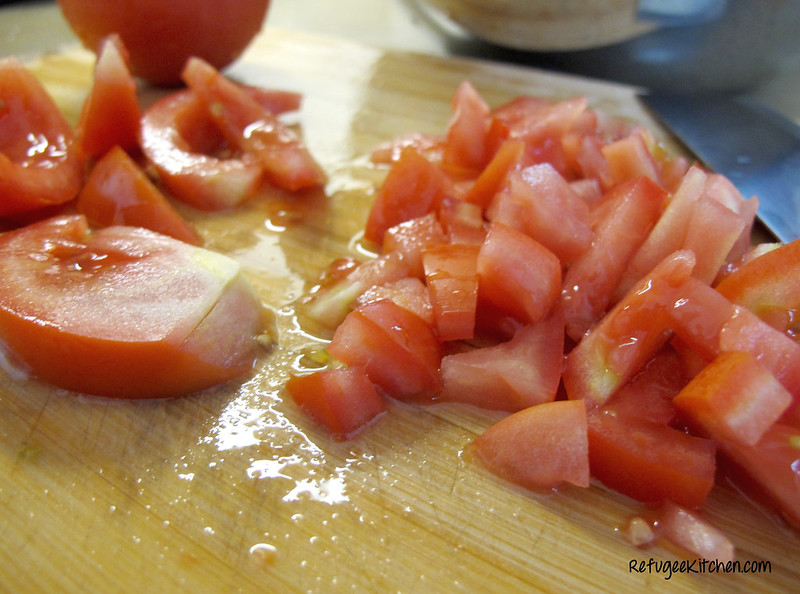 2. Add tomatoes, onions, garlic, juice of one lime, cilantro and a few pinches of salt together and toss to combine. You now have the very basic pico de gallo. 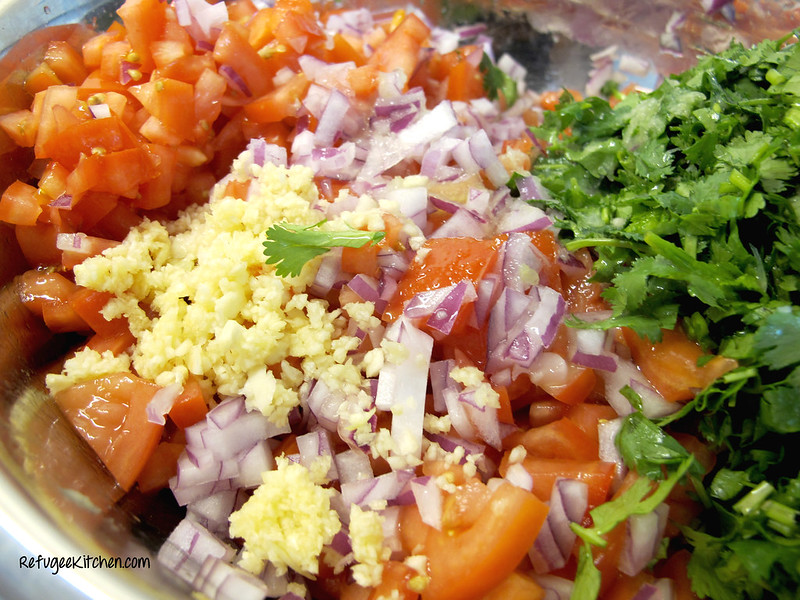 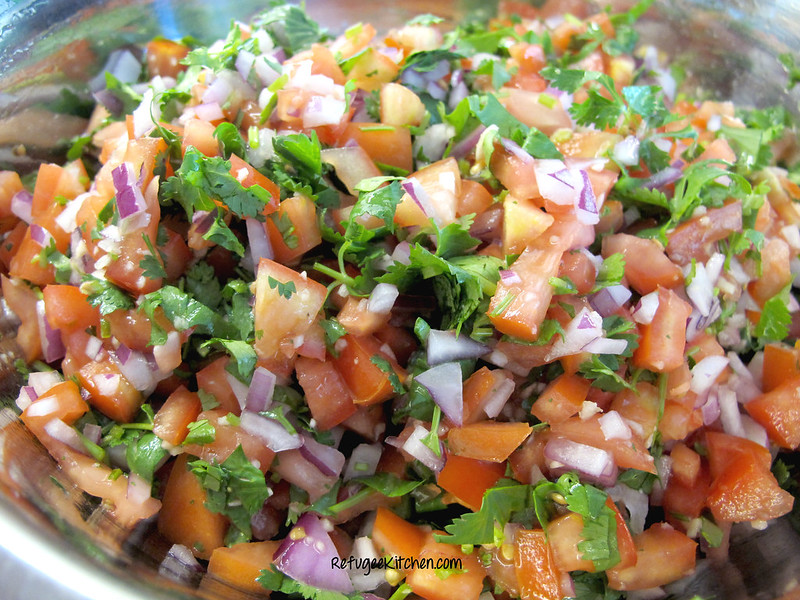 3. I like to take it one step ahead and add some avocados! Easiest way to dice avocado is to cut it half, run your knife a few times down one direction, turn it 90 degrees and run the knife down again. Use a spoon to scoop out the flesh into your bowl. Easy! Don’t choose overly ripe avocados, they should be ripe but firm. 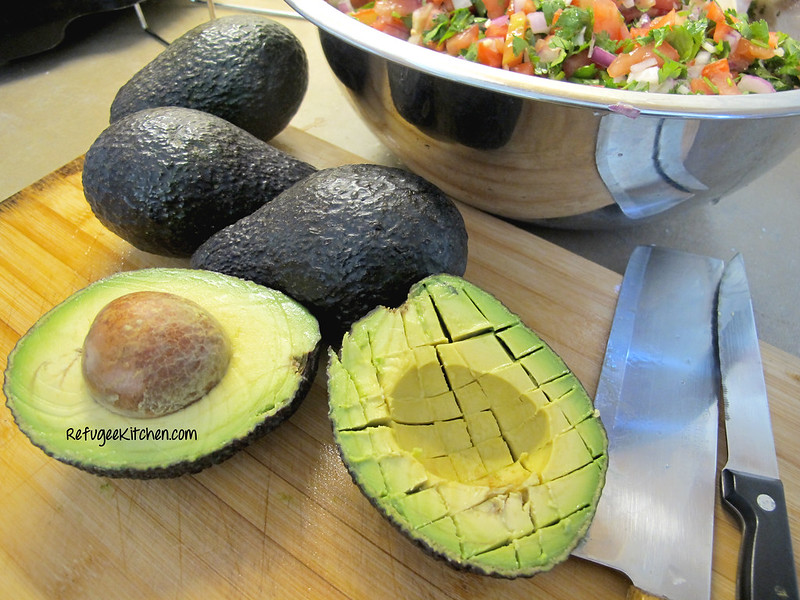 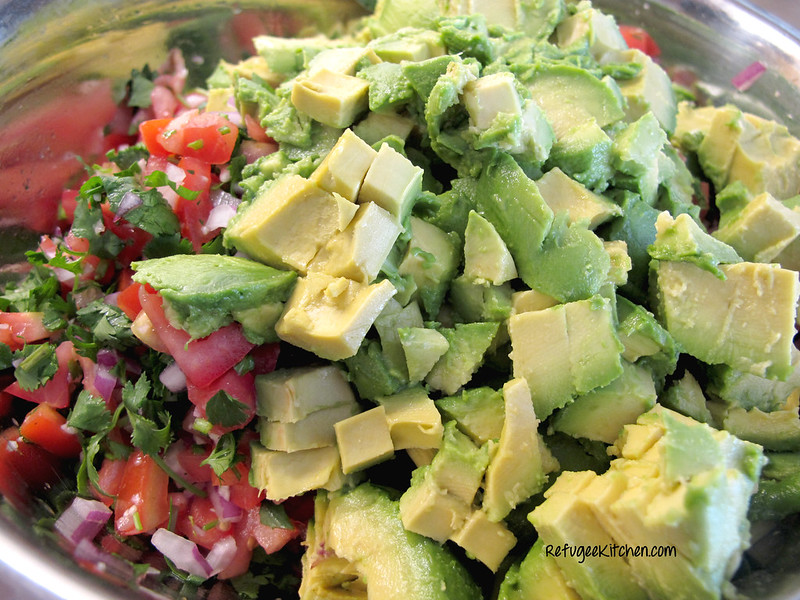 4. Let’s save some of the basic stuff for the people who can’t handle the heat like I can! You don’t have to do this, I just watch out for family members who suffer from heart burn easily! 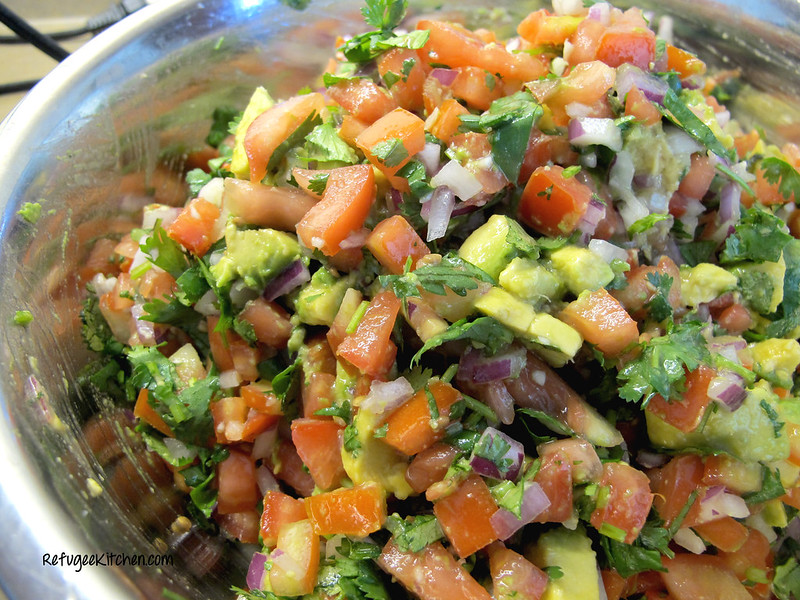 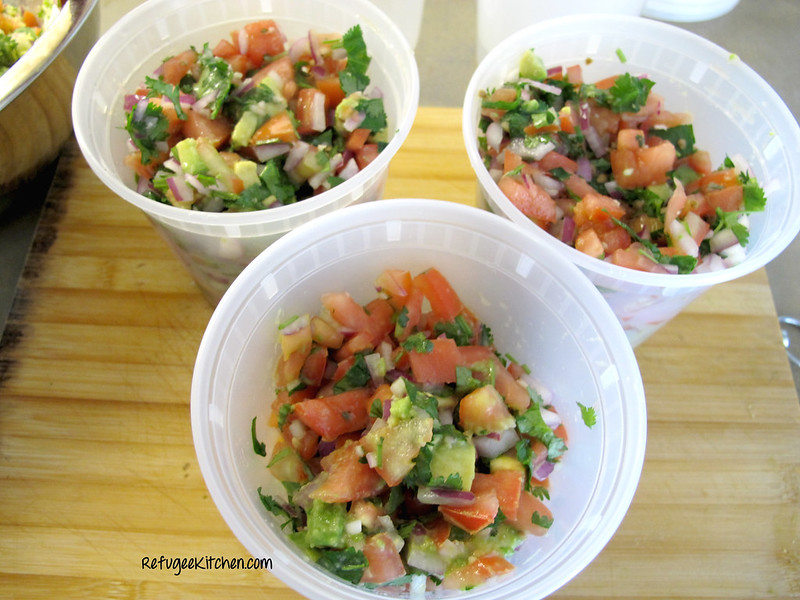 5. Now we can start adding the special stuff! Add some Tajin, do you know what Tajin is? It’s a zesty, spicy and salty Mexican seasoning used on fruits and vegetables to give it an extra kick. I can’t have pineapples without it! 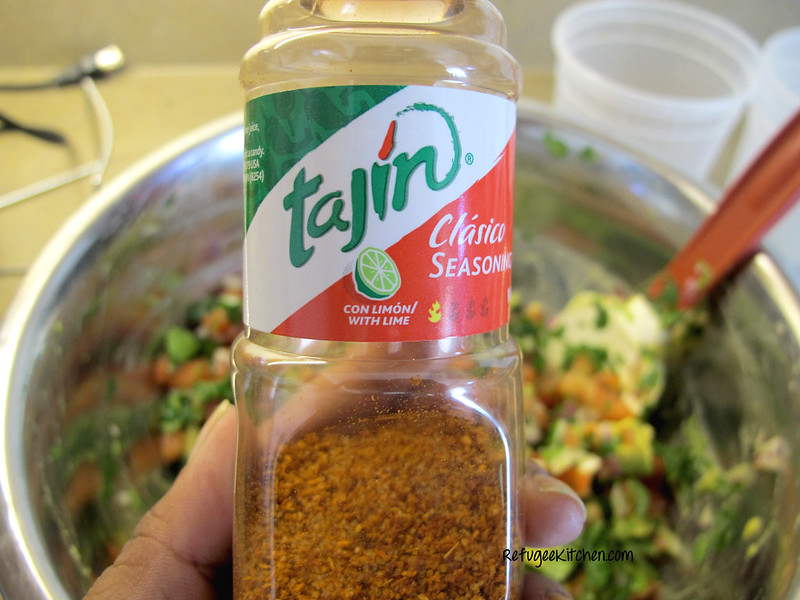 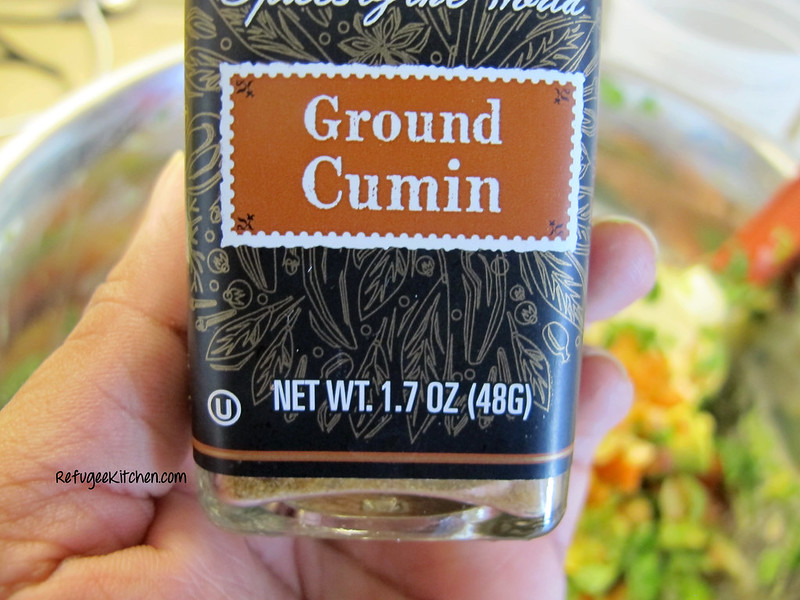 7. Now for my favorite ingredient.. Sambal Oelek! Ground chili sauce, made by the same people who make the now infamous green topped “Rooster Sauce”.. but I prefer this chili sauce over the other. I know I said to add 1/3 of a cup, but really, I think I went about a full cup chili sauce! You can substitute with jalapenos, that is the more traditional ingredient, but I’m Asian and very loyal to my Sambal for spice! 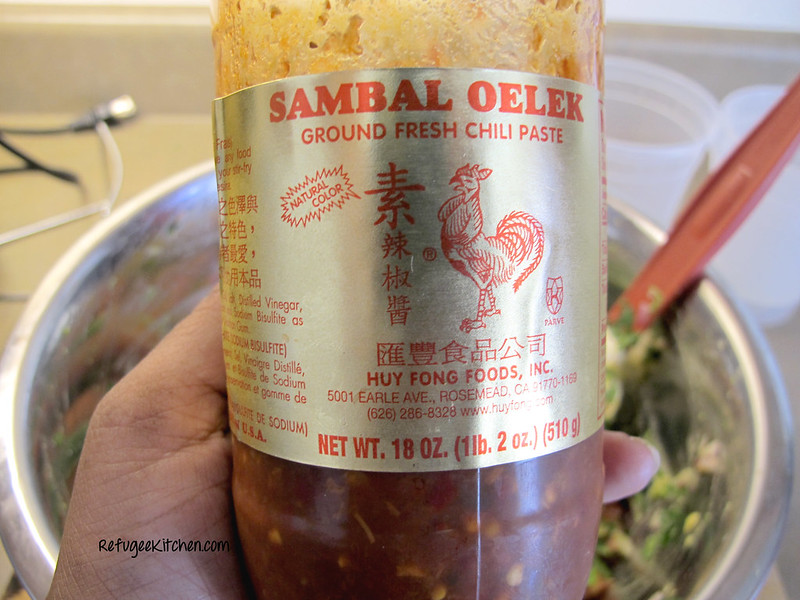 8. Mix it all together and store in the fridge. Pico always taste better after it’s hung out for a few hours. 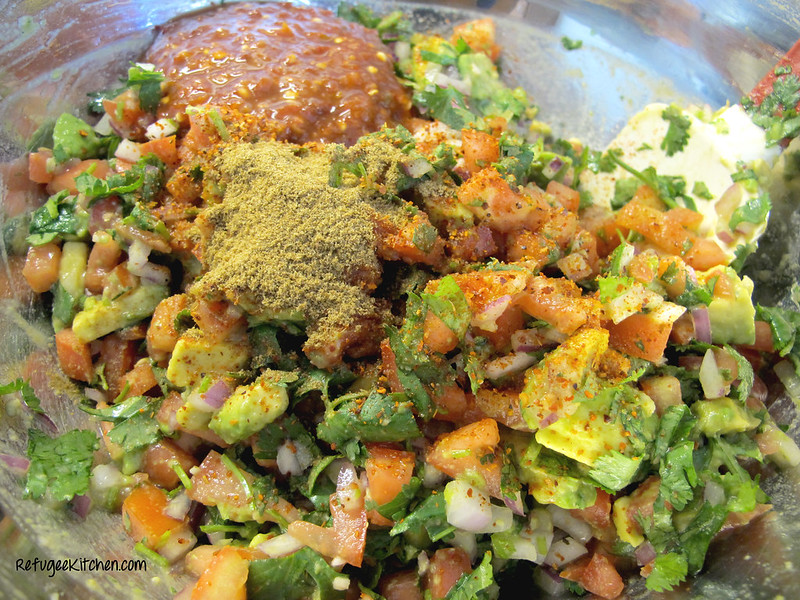